Robbert Suilen (1993) is a vocalist, guitarist and composer based in the city of Amsterdam, The Netherlands.

Driven by the interest of constant interaction and improvisation with his fellow musicians, he goes beyond the border of jazz and exceeds in a style that’s completely his own.

Being influenced by jazz vocalists as David Linx, Mark Murphy, Norma Winstone, songwriters like Bob Dylan and Don McLean but also classical composers like John Dowland and Johan Sebastian Bach. Because of these influences and interest Robbert’s playing and writing can be described as “painting on a canvas”, with every stroke he captures the emotion and atmosphere of the setting he is in.

He sings, plays guitar and writes songs together with Keri Vink in Hireth.

He is also a vocal teacher and bandcoach in the Netherlands, If you’re interested in lessons click here for contact. He coaches bands for ScratchJazz, an initiative to get young people excited for music by playing in bands and arranging songs by improvising.

Robbert obtained a Bachelors and Masters degree in Music from the Conservatorium van Amsterdam. 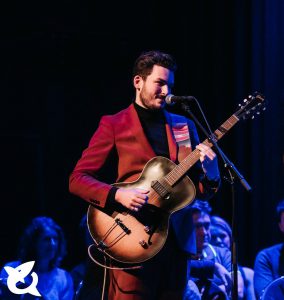